A few short years ago the term cryptocurrency was relegated to what seemed like a backwater electronic currency experiment reserved for fringe high-tech money transfers, not all of them reputable. Today we are constantly hearing about cryptocurrency’s growing influence in legitimate global money transactions as it becomes more mainstream. The metrics for the most well-known cryptocurrency, Bitcoin, are now routinely reported right along side other financial indicators in daily economic market reports. Commerce views investments in cryptocurrency as highly speculative, but does recommend reading this thoughtful commentary by Barbara Turley, CFA, director of investment research, for a fascinating look at this growing phenomena. And for the uninitiated – make sure you NEVER lose your Bitcoin access password! 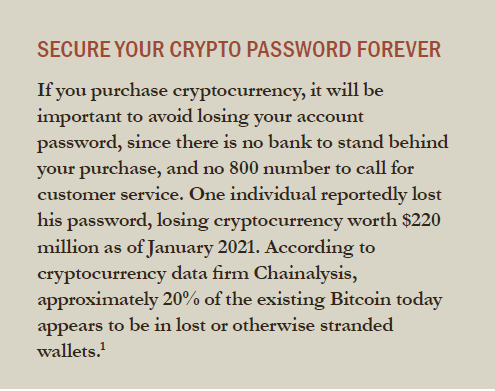 BACKGROUND
Cryptocurrency is a digital medium of exchange that can be used to buy goods and services around the world 24/7. There are thousands of cryptocurrencies trading today, but the most well known is Bitcoin, which clearly has the highest market share. Cryptocurrencies trade globally but are not backed by banks or governments. They have increasingly accepted, particularly in countries with underdeveloped banking systems. Bitcoin, in particular, has caught the attention of investors due to its limited supply and recent runup in price. Because it generates no cash flows and instead trades based on user demand and investor sentiment, cryptocurrency should be considered a speculative investment, with high risks related not only to its price volatility, but also to future competition and regulation.

WHAT IS CRYPTOCURRENCY?
Cryptocurrency is digital and based on a recently developed technology called blockchain. Cryptocurrency can be thought of as a digital form of arcade tokens or casino chips, although it is able to be spent in a variety of venues. Users exchange traditional currency (e.g., U.S. dollars) for cryptocurrency to access the goods desired. Cryptocurrency is encrypted for security. It also is decentralized, so no central authority such as the U.S. government manages it or maintains its value. Transactions and transfers involving regulated currency also do not “require” a central bank or other institution. Bitcoin, according to CoinMarketCap.com, had an estimated value of more than $1 trillion as of March 2021, approximately five times the value of the next competitor.

CRYPTOCURRENCY’S RELATIONSHIP WITH BLOCKCHAIN
The security behind cryptocurrency rests in blockchain, an open, distributed, decentralized ledger or database that records all transactions electronically. In contrast to writing a check that involves a bank’s computers keeping track of the checkwriter’s account, cryptocurrency ownership is tracked through blockchain, and involves a global network of “miners” employing tens of thousands of computers to encrypt and track the transactions.

Each participating computer competes to solve a mathematical puzzle that helps verify a group of transactions. The first computer to do so successfully is rewarded with a small amount of cryptocurrency, so miners are motivated to participate.2 Each verified transaction must be checked and approved by the majority of ledger holders. Once the computers in the network agree that a transaction is valid, the transaction is added to a “block” and is placed below the previous block of transactions in the ledger in a manner similar to a chain (hence the name “blockchain”). In this process, all transactions are recorded simultaneously by the network of computers. This ensures the accuracy of the record, since the ledger is transparent and widely distributed across many thousands of computers.

The blockchain network provides security, because the only way for a hacker to make changes to the ledger would be to hack more than half the computers in the network. A high number of computers on the network equates to higher security for transactions.2

HOW MUCH CRYPTOCURRENCY IS OUT THERE?
According to CoinMarketCap.com, more than 6,700 different cryptocurrencies traded publicly with a total value of more than $1.6 trillion in February 2021, of which Bitcoin represented approximately 60%.3 The closest competitor, Ethereum, represented just under 15%. The next nearest competitor held a market share of approximately 2%. In 2020, there were more than 50 million blockchain wallet users, of which 7 million were active users of Bitcoin.4

Bitcoin was the first cryptocurrency. It was first outlined in principle in 2008 as “an electronic payment system based on cryptographic proof instead of trust.”5, designed with an initial maximum issuance of 21 million Bitcoins. There have been more than 18 million Bitcoins created thus far, so fewer than 3 million remain to be created unless there is agreement reached to increase the maximum.

According to Coin Metrics, in the first half of 2020, the Bitcoin network processed total transactions valued at almost 90% of the total value of transactions processed by PayPal in that period.6 The usefulness of blockchain technology can be seen in an example in which a Bitcoin owner transferred $1.1 billion in April 2020 in a single that settled in 10 minutes and for a processing fee of $0.68. In contrast, an international money wire, which can be sent only during banking hours (versus 24/7 for Bitcoin), may take one to two days to settle and carry fees from 1% to 8%. In the first half of 2020, Bitcoin transaction fees were just 0.019% of the total transaction volume.6

IS CRYPTOCURRENCY A GOOD INVESTMENT?
Cryptocurrency is gaining acceptance as a way to transfer funds and make buy/sell transactions. Companies that accept cryptocurrency for at least some transactions in some locations around the world include AT&T, Wikipedia (for donations to the Wikimedia Foundation), Microsoft, Overstock.com, some fast food restaurants (Burger King, KFC, Subway, Pizza Hut), some sports teams (such as the Miami Dolphins and Dallas Mavericks), a few insurers, banks and countless small businesses.7

Fundamentally, cryptocurrency can serve as an exchange system in developing economies with undeveloped banking systems. Of course, most investors can already transfer funds and transact with traditional currency. Some supporters believe that decentralized blockchain processing can be more secure than traditional payment systems.

The lure of cryptocurrency as an investment is the rise in price that cryptocurrency has experienced, particularly Bitcoin. As the supply of available Bitcoin is limited, more widespread use can put upward pressure on its price, which is attractive to some investors. Although there are mixed opinions about investing in cryptocurrency, many investment professionals believe it is a speculative investment. Most traditional investments are deemed to have value related to their future cash flows, but cryptocurrency does not generate cash flows (which also can be said about other currencies, gold, and commodities such as agricultural products and oil). Some observers have likened it to gold as a store of value, particularly in light of the steep run-up in government debt worldwide.

However, the price fluctuations of cryptocurrency have been far greater historically than the price of gold, and the investor must weigh the risks of investing in cryptocurrency versus the potential reward. While Bitcoin has experienced an upward trajectory in its price, there have been periods of steep price drops, and investors must consider the potential for future large swings in its value.

Supporters believe cryptocurrencies will be the currency of the future and are buying them now before they become more valuable. We note the general belief that a currency needs stability (which cryptocurrencies have lacked thus far) so that buyers and sellers can determine a fair price for goods. Some cryptocurrency investors cite the power of central banks to devalue their traditional currencies, while cryptocurrencies are not currently subject to central bank action.

Likewise, cryptocurrency should be generally unaffected by the day-to-day market action of stocks and bonds, making it a source of diversification in a portfolio. Interestingly, the Commodities and Futures Trading Commission classifies Bitcoin as a commodity. Some large institutional investors now own cryptocurrency, including the endowments of Harvard, Yale and Stanford universities.6 Certainly the total portfolio allocation to cryptocurrency should be appropriately limited, as with any other speculative investment.

CONCLUSION
The most obvious risk of an investment in cryptocurrency is the price volatility. As mentioned above, cryptocurrencies trade more like speculative investments than traditional investments. Cryptocurrencies do not pay dividends or coupons and do not generate cash flows, so the investor must weigh the long-term prospects for price appreciation versus the short-term fluctuations in price.

Additional risk considerations include potential future competition and regulation. Janet Yellen, former chair of the Federal Reserve and current U.S. Treasury Secretary, said there remain important questions about the legitimacy and stability of cryptocurrency, calling it an extremely inefficient way of conducting transactions.

For those who already own cryptocurrency or who are planning to purchase it in some form, there are other risks. Although the blockchain process is largely immune to hacking, individual cryptocurrency wallets and exchanges can be hacked. Hackers can try to penetrate the computer networks that maintain your assets and attempt to steal your private key. One well-known Bitcoin exchange declared bankruptcy in 2014 after hackers stole hundreds of millions of dollars in Bitcoin. That type of risk is not typical when investing in stocks and mutual funds on major U.S. exchanges. (nerdwallet.com)

Clearly there are risks, but there are also signs that cryptocurrency is probably not going away. However, the future cryptocurrency landscape may look very different from the way it looks currently, as improvements are made over time to shore up the weaknesses in today’s options. Due to the speculative nature of cryptocurrency, we are not recommending it for client portfolios at this time.

Past performance is no guarantee of future results, and the opinions and other information in the commentary are as of April 27, 2021.
This summary is intended to provide general information only, may be of value to the reader and audience, and any opinions expressed herein are subject to change.


NOT FDIC INSURED | MAY LOSE VALUE | NO BANK GUARANTEE 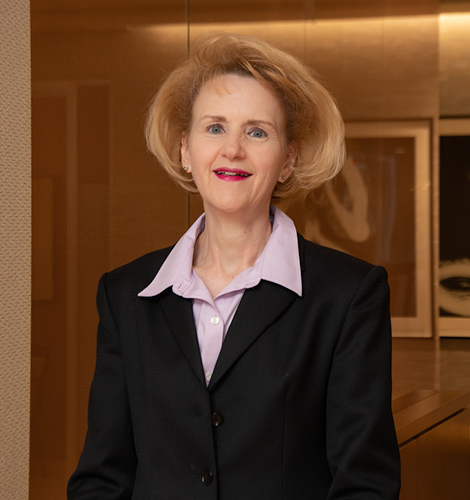 She has more than 20 years of experience in the investment industry in various capacities. Barbara has extensive experience teaching corporate finance and investments at University of Missouri. She also has been interviewed by various financial print and broadcast media.

Barbara has a Master in Business Administration degree from Washington University in St. Louis and holds the Chartered Financial Analyst® designation. She is a member of the CFA Institute and the CFA Society of St. Louis. Barbara volunteers her time at Bravely, Inc., a residential community for women who have survived lives of commercial sexual exploitation (trafficking and prostitution), violence and addiction. Barbara and her husband are the parents of two adopted Ukrainian children, who are now young adults.