President Trump's defeat on the American Health Care Act last week may dictate a more bipartisan approach with Congress going forward, but it won't curtail his efforts to tackle tax reform legislation next. Commerce Trust Company Financial Planning Analyst Andy Hoffman, CFP, sheds the drama and shines a light on potential 2017 tax reform in the first of a two-part series. No matter where your political interests might be, tax reform is sometimes the product of very pragmatic horse-trading, which could still conceivably result in legislation before year's end. The contingencies spelled out here may help you sort through some possible historic tax measures for individuals and businesses.

As rancorous as the political climate is now, there is precedent for passing tax reform in a hostile legislature from the not-too-distant past. President Ronald Reagan discovered early on that cobbling together a workable tax reform package is possible with an end product that could surprise all parties.

Attempting to usher in the greatest change to the tax code since the 1980s is going to be messy, let alone accomplishing it by the August Congressional recess. While the prospect of lower taxes for all and a simplification of an overly complex system are appealing to most, there are groups who have their concerns with the proposals.

Let's start at the macro-industry level. For companies who rely heavily on imports, energy and retail, they would see a drastic rise in their operating costs due to the proposed border adjustment tax. On the other hand, the manufacturers that do not rely heavily on imported goods view this as a benefit because their exports would no longer be taxed, making their goods less expensive around the world.

In a nutshell, if the standard deduction is increased, more people will claim it and no longer itemize their deductions. The National Association of Home Builders sees this as potentially reducing the value of the mortgage interest deduction, possibly lessening demand for homes in the United States. Using similar logic, the National Association of Charitable Gift Planners sees the potential change as lowering the benefit from charitable giving, possibly impacting their members.

The vetting process will be very complex and has multiple participants with very different incentives and motivators. If something as simple as increasing the standard deduction faces such concentrated opposition, we have to wonder about the prospects for more fundamental reform.

And yet, voting the population's pocket book can produce unusual economic alliances.

Of all the platforms President Trump campaigned on in 2016, none will impact more Americans than potential income tax reform. Treasury Secretary Steven Mnuchin recently stated the administration is seeking to complete an overhaul of the tax code prior to Congress' recess in August. While the Republicans control the White House and both houses of Congress, they still must come to an agreement on details of any legislation.

President Trump is expected to release the final details of his plan in the coming weeks, but here is a look at what we know about the proposed changes from the Trump Plan and the House Republican Plan:

Past performance is no guarantee of future results, and the opinions and other information in the investment commentary are as of March 30, 2017. This summary is intended to provide general information only and reflects the opinions of Commerce Trust Company Investment Policy Committee.

This material is not a recommendation of any particular security, is not based on any particular financial situation or need, and is not intended to replace the advice of a qualified attorney, tax advisor or investment professional. Diversification does not guarantee a profit or protect against all risk.

The information in this commentary should not be construed as an individualized recommendation of any kind. Strategies discussed here in a general manner may not be appropriate for everyone.

Commerce Trust does not provide tax advice or legal advice to customers. Consult a tax specialist regarding tax implications related to any product or specific financial situation.

Data contained herein from third-party providers is obtained from what are considered reliable sources. However, its accuracy, completeness or reliability cannot be guaranteed. All expressions of opinion are subject to change without notice depending upon worldwide market, economic or political conditions. 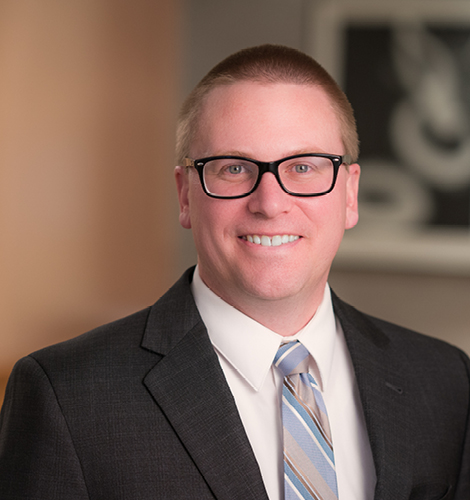 Andy facilitates all aspects of relationship management for the client team, including administering complex trusts, maintaining client communication, and coordinating with internal and external partners to deliver a superior client experience. He joined Commerce in 2016 with ten years of industry experience.

Andy received his Bachelor of Science degree in finance/economics and Master in Business Administration with a concentration in finance from Rockhurst University. He has achieved the designations of Certified Trust and Financial Advisor and CERTIFIED FINANCIAL PLANNER™. Andy is a member of St. Ambrose Catholic Church and the Crusaders Club at St. Ambrose. He enjoys spending time with his wife Megan, daughter, Maggie, and two dogs, Mia and Bowser. He also enjoys watching the Blues, Cardinals, and Illinois basketball and football.

Skip to Navigation Back to top